The City of Delano is the second largest city in Kern county and 30 miles north of Bakersfield, one of the fastest growing metropolitan statistical areas (MSA) in the United States. Located between San Francisco, Fresno, Bakersfield and Los Angeles, Delano is a natural industrial hub. Most importantly, the city center is intersected by Highway 99, a major north/south corridor for central California.

The Delano Marketplace is located along Highway 99 at Woollomes Ave., Kern County, at the intersection of Woollomes Ave. and Dover Parkway. Master Planned Development on a 45 acres land. 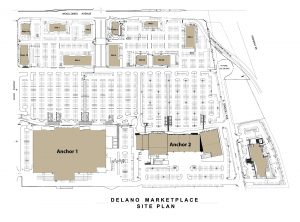